Character name: Serenity Aniya Haze
Nickname: Rainbow
Gender: Female
Age: 14
Crest: Loyalty (Treated the same as Reliability, as permitted)
Personality: Brash and searching for the cool, Serenity is always in a rush to do
things and likes to be first. She dislikes to lose but can always find a way to get back off
her feet. She is reliable and loyal, and would never ever let her friends down in any way.
Biography: Once apon a time a baby was given birth when a giant rainbow came crashing down upon the mother, forever giving the child rainbow-esqe hair. This child was unique and was overly ardent about being loyal to anyone she knew an respected. Eventually one day she was of course, like most kids, abucted by a strange light beckoning from within the black van, thus begining her journey in the pedo, oh I mean digital world.
Appearance:

Puff Balloon: Surprises the opponent by opening its mouth wide, sucking in air, and swelling
its body up to three times its usual size, then seizes the opportunity to expel the air and
escape.

Shippo Swing (しっぽスイング, Shippo Swing? lit. "Tail Swing"): Puts its strength into its tail and
strikes with enough force to blow away even a Rookik Digimon.

Abruptly swoops from the skies and runs through the opponent with the horn on its head.

Knowledge of Swift (迅速の心得, Jinsoku no Kokoroe?): Uses its fast movements to unleash clones
and confound the opponent.

Kaishin no Hadou (改心の波動, Kaishin no Hadou? lit. "Wave of Reformation"): Flaps its wings to
fire off its aura, which guides even its opponents on the path to holiness.

Icy Breath (Odin's Breath): Uses Niflheimr to lower the temperature of its climate and
generate a blizzard. 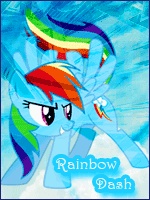 Similar topics
» A Rainbow That Fell From The Sky

Latest topics
» A Rainbow That Fell From The Sky

» Now what did I get myself into

» What did you get me into?