Character name: Luna Dragonstar
Nickname: Dragon
Gender: Female
Age: 17
Type: Data Squad
Crest: N/A
Personality:
Young and carefree, she doesn't like to listen to anyone and has a rather hot temper. She tends to just flat out punch, slap or kick someone who gets on her nerves. She likes most little kids and won't do a thing to hurt them. She likes most digimon too though some tend to get on her nerves. She doesn't like being told she's wrong even if she really is wrong. When she isn't mad she can be rather entertaining to hang around. She tends to get into trouble but not to bad. She sometimes tries to get people to laugh or she'll play pranks.
Biography:
History:
Luna got her nickname because of her temper, whenever she got mad the people around her learned to avoid her because she 'turned into a dragon' (figuritivly). When her temper got the best of her she tended to get into alot of fights though she would never hurt a little kid. Several things tended to set her off but the rest of the time she was fine to hang around. She had a bad habit of throwing water ballons at people during the summer. She said it was because they looked hot and she was trying to cool them down (Nobody ever believed her).

She met Cocomon on her way home from school one day. At first she thought the digimon was just a kitten till she had a closer look and it turned out just to be a 'head' with a tail. "Well your a odd little thing, but your cute" she said picking up Cocomon. "Thanks" Cocomon said startling Luna into nearly dropping the digimon. "You talked!" Luna was surprised but then Cocomon jumps in her bag just before a small group of people ran around the corner. "It can't have gone far!" One of them said as they ran by Luna. Luna guessed what they were looking for. She was tempted to hand the odd creature over but decided againest it and walked on. "Just stay in there" Luna whispers to the hiding digimon walking as quickly as she could without drawing attention to herself. A few minutes later the group was back. "What do you mean we're right on top of it? We don't see anything" the same guy from before was yelling into his earpeice before noticing Luna. "I'm going to have to check your bag" he said to Luna. Luna doesn't listen and takes off running. The group tried spliting up to catch her but after a few minutes she turns and kicks the guy following her. She surprised him enough to land a good kick and takes back off the way she had come before the other two of the group could catch up.

Once she was safely away she sat and opened her bag. "Your alot of trouble for a little thing. What exactly are you?" Luna asks picking the Cocomon up out of her bag. "Exactly I'm a Cocomon, but what I think you mean is what am I. I'm a digimon." Cocomon says bouncing up and down in Luna's hands. "Why were they chasing you? You don't seem dangerous." Luna says. "They were trying to catch me and send me back to the digital world. That's where all digimon come from." Cocomon says. Luna then noticed something tied to Cocomon's tail. "What's this?" Luna asks untying the thing which was a digivice but she didn't know that. "I don't know, it's been stuck there since I hatched. They must have tied it around my egg." Cocomon says. "It looks like some sort of device, a digivice." Luna laughs joking not knowing that was actaully what it was called. She slips the string over her head and was looking at it when she was suddenly grabbed. "LET GO OF ME!" She yells kicking and thrashing as another set of hands grabs Cocomon. It was then Luna noticed she reconised the two people in front of her, they were from the group that was chasing her earlier meaning the one holding her was the third guy. "I'm afraid we can't do that. We'll have to wipe your memory before we can let you go." the one girl in the group says as they drag Luna kicking to a car.

Luna was sullen the whole ride looking at the digivice sure that they would take it from her later. She was also worried about that creature, the cocomon. She had liked the little thing and was quite sure these people were going to hurt it. Currently it was stuck in some odd container in the front while she was stuck between two of the people in the back. When they arrived they dragged her out of the car and into a elevator, one of them holding the trapped digimon. Luna looked at Cocomon and saw the digimon was frightened which told her that whoever these people were that she was right, they were probably going to hurt the digimon. When the elevator opened Luna jerked and hit the container out of the guy's hand sending it flying. When it fell it broke open letting Cocomon out. "RUN!" Luna tells it as she gets grabbed and held down. Cocomon however doesn't run and starts spitting bubbles at the people and then jumps forward biting one the ones holding Luna on the arm. It distracted the guy long enough for Luna to squirm free. As soon as Luna was up cocomon let's go and they both take off running. They got a bit of a headstart since the group still had to scramble out of the elevator. However they end up cornered at a dead-end. "Just what do you want with cocomon?" Luna yells rather then asks holding the digimon in her arms. "What we want is to send it home. It doesn't belong here. Now just hand it over calmly and nobody will get hurt." One of the guys say trying to calm Luna down already sporting a bruise where Luna had taken him by surprise earlier. "I don't think so. Cocomon is with me now and your not taking her." Luna says her stubborn temper kicking in. The guy sighs rubbing his forhead and opens his phone, turning and walking a few feet away while his partners kept Luna cornered. A few minutes later the guy snaps his phone shut and walks back. "Come on." he says motioning for everyone to follow.

He ends up leading them to a equipment filled room with something that looked simliar to a star trek teleporting pad in the center. 'I watch too much tv.' Luna thinks. "You can keep it but you have to go with it." the guy says. "Go where exactly?" Luna questions. "To the digital world, if you can survive you'll be brought back. There's already a few humans there so you won't be completely alone. If you don't want to then hand the digimon over." the guy says. Luna just holds onto Cocomon tighter "I'll go" she says not thinking things through. A few minutes later she had a new backpack on, filled with supplies and such, and standing in the middle of the pad still holding cocomon. "Good luck to you" the guy says before Luna blacks out as she gets transported.
Appearance: 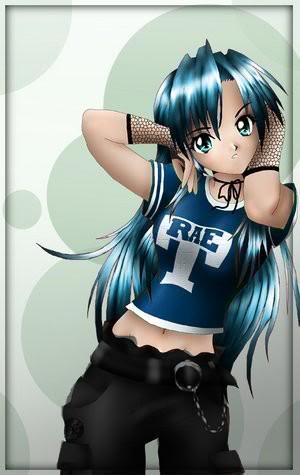 "He﻿ disobeyed your orders. What will you do?"
"I'm gonna sit here and enjoy the fireworks." 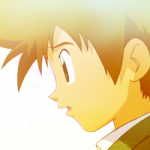 Latest topics
» A Rainbow That Fell From The Sky

» Now what did I get myself into

» What did you get me into?